What if I was to tell you that you can have whatever you want?  What if I told you that anything in the world, that you might set your heart upon can be yours, would you believe me?  What would you ask me for?  What might your heart dare to dream?  This secret thing is tied to your purpose.

I am here to tell you that very thing.  You can get whatever you want.  Want to travel in your own personal private jet?  You can.  Want to make a million dollars?  You can.  Want to have a luxurious villa in Malibu and be waited on by butlers and maids.  That too, can be had.  But, is any of that really your purpose?

The point is, if you want it you can get it.  I assure you of that.  Whatever you strive after, refusing to give up, and work toward harder than anyone else, that thing is sure to be yours.  There are thousands of personal histories that prove this out.  Ben Carson was raised in the projects.  Babe Ruth was raised in an orphanage. Beethoven was deaf.  Thomas Edison was told he was too stupid to be educated.  Same for Einstein.

But, they never stopped striving.  They always came back, renewed their efforts, and one day it all came together. They found their purpose, committed to it, and swam in its flow all the way to success.  It is a law of the universe; like gravity.  In Christian vernacular we call it the Law of Reaping and Sowing.  The myth of the overnight success should evoke a wry grin.  Just like Unicorns and Leprechauns; we know there is no such thing.

Let me get to the point already.  As a Christian we should be the shining examples of excellence in every category. We should have the best artists, the most promising athletes, the finest authors. But, we often expect God to give us shortcuts. There are NO SHORTCUTS to the life you want.  There’s no magic wand- no personalized success template- no “money back guaranteed” life hacks.  What we do have is the knowledge that most people will give up before they ever breathe the rarefied air of purpose.  Since most quit too soon, success is correlated with outlasting the rest of the field.

Think about it as a distance race.  In this race there is no finish line.  You are simply told to keep running.  At the beginning of the race there are millions of runners.  The gun goes off, and you all begin to move away from the starting line.  Hours pass, and you are still running, but you notice some of the others stopped for a drink of water or bite of hot dog.  But you keep running.  More time passes, and you it occurs to you that you’d like a drink too and a bite of food, but you also realize that there are fewer runners in the pack.  So, you decide to press on.

Now the runner’s high begins to take you.  You feel the euphoria, and the pain in your feet and knees subsides.  You’re breathing has normalized, because you’ve been properly trained.  You are a runner after all!  You live for this.  Then an amazing thing begins to happen.  The spectators are lined up cheering your name.  One of them leaves the sidelines and runs beside you for a bit offering encouragement.  Another hands you a water and energy bar, as you jog by.  All are waving banners, all want to see you succeed.

There are fewer and fewer runners.  As the miles mount at your back, and the fatigue sets in, one thought spurns you on.  You only have a handful of other competitors at this point. Victory has never been closer, and all of those who quit early will never know the thrill that you are experiencing.  Now, bolder than ever, you begin to dare yourself to run until you collapse.  You engage in positive self speak saying, “I can do it.  I am tougher.  I am stronger.  I will outlast, it is my purpose!”

Then, all of a sudden, its just you.  You are the last man standing.  The race is over, because only you endure to the end.  And there you stand, among a throng of rabid supporters, crying and laughing and sweating and stretching. You’ve done it. But, you won’t stop there. You keep running, because who knows what lies beyond that next horizon..

Yeah, success is kind of like that. It’s not a sprint. It is more like a tour. You just keep doing the right things over and over long after others have given up, and you will get the recognition. The guy who gets the promotion is the guy who shows up early, works through his lunch, stays late, and always volunteers when the boss needs someone. He does more, so he benefits more. He sows more seeds of effort, so he reaps more fruits of success.

You’ve got to execute your purpose everyday. Make forward progress everyday. It’ll make you happier, holier, and a better witness for Christ. If you’re a writer, write one new page every day. If you’re an athlete add one rep to your work out everyday. If you’re in the corporate world, add one small skill to your repertoire everyday. I want you to live your purpose. At the end of your life, you will get that thing which your secret heart of hearts has yearned for- Heaven, the presence of God..
Success is not owed you, but you do owe it to yourself and God to fulfill your purpose.

Satan hates sex.  He hates it.  Are you having trouble believing that?  It smacks you in the face doesn’t it.  Sex was a gift given to humanity by God.  It is the one act wherein, humankind directly contributes to the ongoing creation in procreation.  It also symbolically creates one flesh, thereby best reflecting the Divine nature.  We are His image.  During marital intercourse, we best express our image and likeness to God.  It was sex, and procreation, that ultimately lead to his defeat by Jesus on Calvary.

So, yeah, satan hates it.  He hates it.  That’s why he has perverted it.  In order to undermine the Divine image, and continue his mission of malice and destruction toward creation.  He had to make it dirty, to steal the sanctity of the act.  He had to make it homosexual to rob one gender of the other, and remove the divine image from the act.  He took it out of the safety of the marriage relationship to make it dangerous, to plunder it of the psychological, emotional, and physical virtues.  And he had to make it public, cheapening it so it would lose its value.  So, that’s why everywhere you look it sex, sex sex, and gay characters on tv, and adultery on the rise and 53 million abortions, and so on.

I grew up in central Ohio, and we had our pick of three great theme parks.  Every year we’d pile into the family minivan and drive down to Cincinnati, for an exciting weekend of camping and roller coasters at King’s Island.  One year my brother, Joey, begged dad for a big plate of cheese fries.  Dad protested, but ultimately Joey got the fries, with the stipulation that he eat them all.  About halfway through the plate, he began to complain that his stomach ached.  He asked to be allowed to throw away the rest of the cheese fries, but my dad was a stickler.

Joey ate until he was green and eventually barfed up most of what he’d crammed down.  I guess he wasn’t fooling about the upset stomach.  Needless to say we all felt badly, none more so than Joey.  And we all had to put up with his whining for the rest of the day.  It was classic.  Everybody paid the price that day, my dad, my brother, and me.  It as too much grease, and too much starch. Eating like that will make you sick.  Garbage in, garbage out.

Is it just me or is anybody else sick of all the gay stuff they expect us to tolerate.  I mean, come on!  It has invaded every story line.  Even S.E. Hinton, author of the The Outsiders, is being shamed by the social justice crowd for saying her characters are not gay.  Not content to force current gay based storylines on us, they also want to rewrite history with a gay agenda.  I’m telling you this, right now people are starting to feel the belly ache from ingesting what isn’t good for them.  Soon will come the retch.

Maybe you don’t mind shows like Game of Thrones, Ellen, Modern Family or Scandal.  It’s just TV, right?  We all admit it isn’t ideal that these programs have such lurid and debauched content, but “come on, it’s a great show.”  I get it.  I really do.  Missing out on what the culture is talking about is not fun.  How do we disengage from these cultural touchstones, but remain relevant and stay clued-in to what’s going on in the world?  Being in the world, but not of it, is a real headscratcher.

It feels like you miss out, when you eschew these types of programs.  Believe me I know. It kills me not to be able to join in the discussion, when friends are talking about them.  I’m left out of a conversation, and that is a huge loss for me.  C’est la vie.  The christian life is also about sacrifice.  Living in a Godly Culture demands we sacrifice some things, godless things.  But the scriptures say,  “Whatever is true, whatever is noble, whatever is right, whatever is pure, whatever is lovely, whatever is admirable—if anything is excellent or praiseworthy—think about such things” (Philippians 4:8, NIV). 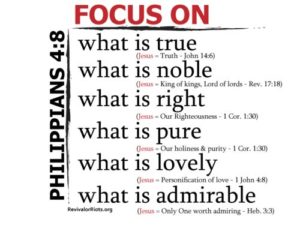