We are manically obsessed with superficiality….

I’d like to coin a new term, if I may. It is “Trans-mania” it means the obsession with chaning our outsides, in the vain hopes that it will produce inner peace. Let’s face facts, we are obsessed with altering our outsides. Americans join gyms, buy flattering clothes, get surgical procedures, and even mutilate their own genitals to produce a desired physique.

Warning:  The next few paragraphs, in italics, are fictitious and do not represent the real feelings of the author.  These sentiments are meant to illustrate the lunacy of transgender reasoning, via an reductio ad absurdum argument.

I knew from an early age I was born in the wrong body.  I vividly remember looking at the perfect images of those other bodies and thinking, “That’s what I am.  That;s how i am supposed to look”.  I’ve always wanted to make the transition, and I even style my looks to match those I feel best represent my true self.  I wear the clothes they wear, and it makes me feel more normal.  For me it is either transition or suicide.  I need this to be mentally stable.  I want to formally declare my true identity.  I was born the wrong species! I am not really human, mentally only physically. I am really an alien from the planet Kepler-186d.  I should have tentacles not arms.  I should have slimy secretions and cloaca, not skin and human genitalia.

What if I told you I was born in the wrong body, and felt that I should have been born an alien, and really truly expected you to take me seriously?

Do you see the problems here?  Any human who really believes he is an alien, is clearly mistaken.  Depending on the level of his attachment to that belief, and his proclivity to endangering himself or others, we would probably even put that person in an insane asylum.  He would be medicated, put on suicide watch, and live out his days in a padded room.  Why?  Because he is insane.

So, why don’t we apply the same reasoning to humans who declare they were born the wrong gender?  We think it is lunacy to believe a person was born in the wrong species, so why do we as a society accept that some are born in the wrong gender.  It really is a mental illness.  If we take their logic, their arguments, and their reasoning but express it as a desire to be an alien species, instead of a different gender, it sounds foolish.  And it is foolish.  It is foolish either way, gender or species. 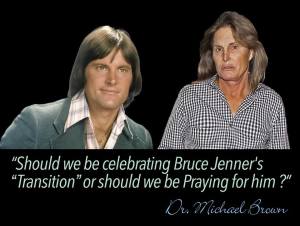 Statistics show that  plenty of patients, although not all, who have gotten gender reassignment surgery regret it later.  For a very thorough going website on the subject, please visit sexchangeregret.com.  It is based in love, and full of great resources.  There is a whole lot out there the sex change industry doesn’t want you to know.  In fact, many who receive the genital mutilating surgery known as “gender reidentification” choose suicide, despite having had the supposedly life changing operation.   One such person was Nancy Verhelst/Nathan Verhelst, and her story is tragic.

The fact remains, no one should try to base their inner joy of off their outer appearance.  Our looks will always fail us.  Our bodies will never bring true joy.  But, we are more than our bodies.  We are always trying to feed our deep spiritual hunger, with external, often materialistic, things.  It’s like putting E-87 ethane in a Harley Davidson motorcycle, and expecting it to perform at peak condition.  FOOLISH!  The outside material stuff cannot feed the hunger that comes from internal spiritual needs.  So, why do we take such pains to make our outsides look a certain way?

The answer for some is that the material world is all they have.  They don’t have healthy souls, and they are spiritually dead.  The answer for others is that changing the outside is easier than doing the hard work of changing the inside.  The outside can be changed with clothes, surgeries, diet and exercise, even makeup.  That’s easy.  The inward heart of a person can only be changed through God’s grace.  Repentance, and turning away from sin, to please God.  It’s hard.  It’s not natural.  It is contrary to everything the godless culture tells us will satisfy.  It takes faith.

Ultimately, we don’t know what’s true about Bruce.  I pray it is all a big media lie.  I pray that Bruce, one of America’s greatest athletes past and present, is just the victim of “trans”-hype.  When we should be enveloping Bruce with our prayers, most of us are too busy speculating about his “trans” identity. Maybe he really is confused, hurting, and considering living his life as a woman.  This would be terrible.  He will live the rest of his life as a mutilated man, masquerading as a female.  And, God only knows the effect it will have on his sons, daughters, and the youth of our nation.

God’s power will transform you, if you respond to it with loving, trusting obedience.