Amid the CGI, contorted plot lines, and action sequences it might be easy to miss the underlying moral framework upon which Marvel’s three movies featuring Thor rest(Thor, The Avengers, and Thor: The Dark World). These films are, for me, more than just entertainment; they are a deep and broad affirmation of my core values. There are many stories in our culture which warn that might, in the hands of those with weak character, will destroy what peace, wisdom and goodness there is in the world. Yet, might, when wielded by the wise and good and peaceful, can bring the utmost possible benefit to the largest population. In short, Thor is not really the story of a demi-god princeling, battling his half-brother for the crown and throne. It is the story of Might, learning humility. Only humility produces the character one needs to be worthy to lead. To win a crown one must be tested, judged, found worthy, and awarded.  A crown worth having is never merely bequeathed.

2 Timothy 4:7-8  “I have fought the good fight, I have finished the race, I have kept the faith. Now there is in store for me the crown of righteousness, which the Lord, the righteous Judge, will award to me on that day—and not only to me, but also to all who have longed for his appearing.” 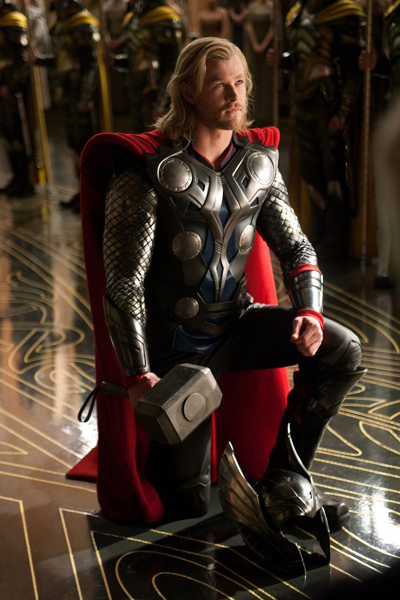 When we first meet Thor, he is every bit the entitled aristocrat. He is poised, certain, even cocksure. He assumes that he is unmatched in battle, and uncontested in the heart of his father. Leaving behind, for a moment, whether or not his assumptions are correct, it is plainly seen that Thor is pretty pleased with himself. Thor is the kind of person to whom you can pay lip service. He is susceptible to flattery, and, with a well-placed word, a manipulator can easily stoke the fires of his wrath against an unsuspecting third party. On the other hand, one can remain inconspicuous, off his radar, if one knows how to talk slick and sycophantically. The enemy that conquers Thor is the invisible foe whom he counted a true friend. He does not see his destruction coming, because he cannot see how it could possibly come. He is distracted by his own renown. His own downfall is of one part with his fascination with himself.

Longing for glory is not necessarily a bad thing.  I believe men were born for glory, in some form and portion.  God made man in His own image, and one of the implications of that is He apportioned humanity with some of His own glory. Humankind has never made peace with its allotted amount of glory, this is why we seek to make ourselves out to be better than we really are.  We try to be rich, good looking, charming, and smart, not only because we care for riches, good looks, and the rest, but also to convince others to over-value us.  We concoct schemes and plans, abiding by our own best judgement, to get the glory we are hard after.  This often leads us far afield the path of our own conscience.  If that weren’t bad enough, it also leads us to commit sins against our heavenly Father. Thor was following his own ambitions, when he went astray.  He took his own council, when he should have obeyed his wise, loving father.

Psalm 8:5  You have made them a little lower than the angels and crowned them with glory and honor.

Isaiah 53:6 We all, like sheep, have gone astray, each of us has turned to our own way…

Judges 21:25 Everyone did what was right in his own eyes.

Proverbs 14:12 There is a way that seems right to a man, but its end is the way to death.

It would be unfair to only speak of his shortcomings, and none can deny that Thor has positive qualities. For one he is a loyal friend, and seems to genuinely delight in his companions. He is keen to impress his father, and win glory on the field of battle. He is impossibly brave, and, for me at least, that covers a multitude of sins. But, Thor is rash and bull headed. His strengths betray him when he puts all his trust in them. Nothing fails like success. Because he has been so successful in combat and has over and again shown ability to fight his way out of a corner, Thor has gotten used to leaping before he looks. He acts without thinking, and plows onward against the council of those he calls truest friend.

Not only does Thor excel at violence, he enjoys it. He, like Shakespeare’s “dog of war” once let slip of its restraints, wreaks his terrible wrath against the guilt of Jotunheim. He is able to rationalize his actions, in his own mind, so that he absolves himself of wrong doing. He tells himself that he attacked the Frost Giants for the good of the realm of Asgard. Whereas it is true that Thor fights for Asgard, in this case he is acting against the best interests of his realm. He is self-deceived, because he does not wish to see his own folly. He thinks he is behaving honorably, when he wages a forbidden war, gambling the lives of his friends and the peace of the realms. Odin’s assessment of Thor is that he is a “vain, greedy, cruel boy”. To which Thor replies, “And you are an old man and a fool!” In a lot of ways he is a worse traitor than even his brother, Loki, because Thor is the chosen successor to the throne. The higher up the office of the being who falls, the lower their degradation when they land. That is why when Adam’s race falls, it becomes depraved humanity; and when an archangel falls, it becomes the Great Red Dragon, Satan. The devil started that much more exalted and glorious, then descended that much lower and wickedly degenerate.

Thor had quite a long way to fall. Before his profound debasement, he is basically the Lord Protector of the realms and his father’s chief delight. Thor was all but crowned king of Asgard, when instead he is stripped of his power and banished to Earth. He fell to earth like lightning from the sky, despondent, weakened, and with no ability to return to his once lofty seat. Once upon a time humankind was strong, virile, holy, and had an exalted place in God’s universe. Our race was untouched by the ravages of hate, dishonesty, and doubt. It was a glorious destiny. One we vacated, having disqualified ourselves, to our perennial shame and hurt. We find ourselves in the place of Thor; banished to be a wanderer on the earth, confused, tormented, and squinting up to the heavens for relief. No longer are we sure of our place in creation, we now look ever and anon for meaning and significance. We, who were once mighty, have been brought low. We, like Thor, must depend on the mercy, forgiveness, and grace of our loving Father. Without which, we are lost.

In other ways Thor’s betrayal is not as bad as Loki’s, because at least Thor errs on the side of good intentions. Thor’s sins are different from Loki’s sins in that they are up front, in your face, and he takes no pains to hide them. He is an unabashed transgressor, and even defends his actions to his judge and father, Odin. Loki’s sins are secret, sneaky, and part of a cunning plan to get revenge. Thor’s are noisy, conspicuous, and come from misguided attempts to do for the good of Asgard. Both are sins, but they are sins of a different kind. Thor falls short of his father’s will, doing what he believes is best for those he has sworn to protect. Yes, he defies Odin, which, in this case is unpardonable. But, he does it willing that great good would come of it, having been fooled by the tongue of a more cunning sort of mind.

Eve’s temptation by the Serpent was accomplished, not because she was offered a rotten, maggot infested gourd, but a wholesome, beautiful, wisdom endowing fruit. She is offered the choice to defy God, in order that some great good might be gained. Satan could not possibly have tempted her with a sin that, on its face, looked like nothing but evil. She would have had no palate for that. As it stood, since the serpent offered her something pleasing to the eye, she was hopelessly out gunned. The serpent cunningly showed her how good the fruit was (for it had the power to make one wise, like God, knowing good from evil). The devil’s great trick is to tempt humans by substituting some secondary good (like being able to be wise enough to know good from evil) for a primary good (like obediently trusting the God and Father of us all to bring about perfect outcomes). It works so well, because he shows us the good upfront, hiding the evil that will follow. It is a bait and switch.

Whenever the devil can convince humans to put second things first, he has us in his thrall. Take for example some dictatorial political system, the Communist Party or the Nazi’s. They had essentially the same aims; dominate the world to instill their version of order and rule. The Communists feel that we should all work not for individual gain, and possessing nothing for ourselves, so that all in the society can benefit as a whole. This might be putting things stupidly simple, but the thing itself seems good on its face. We would call good the charitable man who goes to work, saves his money and does without this or that creature comfort, that he might have something to give to the poor. See, bait then switch. And again, the Nazi’s stated goal was to rid the world of that which made it baser, sicker, and genetically imperfect. Once again, I may be speaking too kindly of the Nazi’s, but no one can argue that better genes leave humans in better health. We would call good the benevolent geneticist which works to rid certain bloodlines of hereditary disease. Once again, it is bait then switch.

Those things which a charitable man or benevolent geneticist might do of his own accord, could actually end up being good deeds. However, that same man or geneticist having been compelled by a power over him, cannot possibly hope to gain from those deeds which he never would have done were it not forced on him. The good was in the volition, not in the action itself. Often times evil is also in the volition. One must use his will to defy God; this is the core of sin

In the end, Thor is humbled by his labors, which imbues him with the character that Odin had always wished for him. He learns to value the weaknesses of others; even protecting them, when he cannot possibly benefit from it. He gains a sense of obedience, which only suffering and debasement can endow. He lays down his very life, knowing that it is the only way to assuage the malevolence of Loki. Thor’s intrinsic virtue (classically speaking Virtue means “the power to do good”) was not found in his hammer, the command over the elements, or his godlike strength; it was in his identity as the son of Odin. When he became the person Odin had in mind, he also won the blessings that come with being Odin’s son. Christians are not counted God’s children, because they do good deeds. Rather, it is the Christians’ identity in Christ, which works to produce the good deeds in the first place. Christ in us lays the groundwork for behaving like a Christian. It is like seeing how an older brother emulates your dad, and, when its your turn to do likewise, you have his example to follow.